Imagining Fungal Futures,
or, Did Mushrooms
Invent the Internet?

What does autumn smell like? Perhaps it conjures up the aroma of pumpkin spiced desserts, or mulled cider, or, if you frequent some of the old-growth forests outside the city, perhaps you are imagining the unmistakable smell of autumnal mushroom blooms, which sprout in abundance from the roots of trees at this time of the year. As the temperature starts to decline, and summer’s green wood decomposes underfoot, we see networks of mycelium all across the region bloom up from the topsoil. Despite their hyper-seasonal significance, we might not think of mushrooms immediately when we consider the meaning of fall. In re-examining the importance of the mushroom in our autumnal grammar, I’d like to suggest that mushrooms also invite us to re-examine many of our assumptions about the complex web of relationships between food consumption, medicine, and our ecological networks.

Mushrooms are especially relevant to our seasonal moment not only because of their exquisite gourmet potential (which we hope to explore in some depth!) but also because of their fascinating social and ecological potential. In many ways, mushrooms build a bridge between ancient networks of knowledge and radically futuristic applicability. Oyster mushrooms, maitake, and matsutake are just three species of the thousands of culinary fungi species that have been researched over the last decades as functionally valuable, for uses in medicine, bioremediation (the technical term for “environmental cleanup”), and food security. In this introductory essay to autumn’s mycelial cornucopia, we hope to show the ways in which mushrooms can help to bridge the gap between the eternal cycle of seasons and the unending newness of life in modernity — with the added benefit of deliciousness! 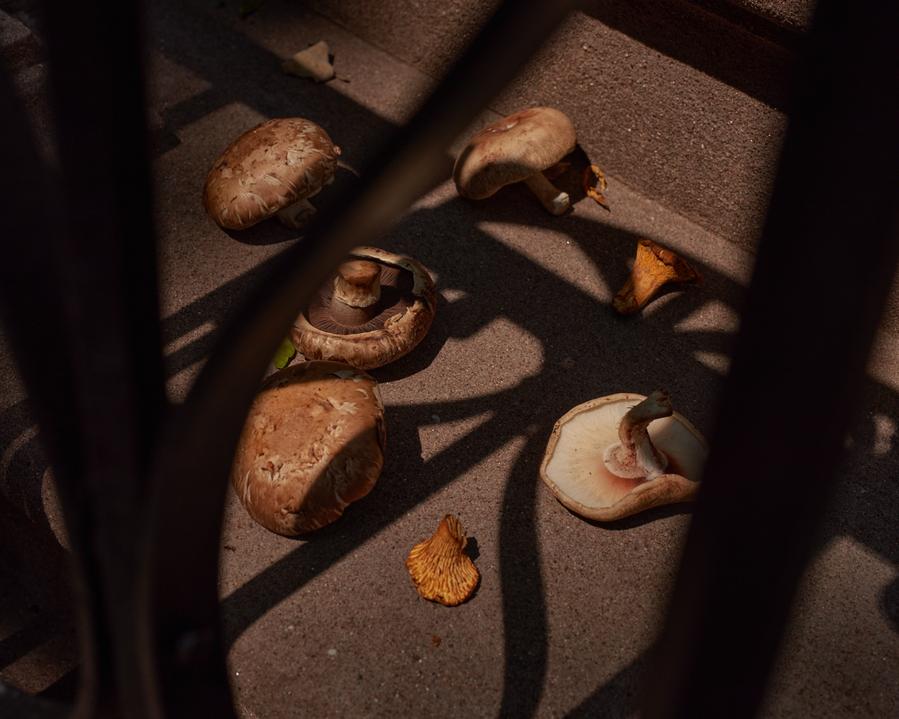 Walking around autumnal forests in New York State, one of the most commonly cultivated fungi worldwide comes into view: oyster mushrooms. This broad genus (Pleurotus) is responsible for many species of choice edible mushrooms, such as king trumpets and golden oysters, that can be found in equal abundance in rustic cast iron skillets, as well as Michelin starred haute cuisine. Most of the oyster mushrooms you find in markets are grown, and not found; while oyster mushrooms can be foraged from the forest, the tenacious nature of their mycelium (the thread-like subterranean fungal colony that gives rise to mushrooms) makes them particularly suited for cultivation. Basically any kind of cellulose-based substrate can bring forth a crop of oyster mushrooms — cultivators have been known to grow oyster mushrooms atop wheat, rye, bamboo, straw, cotton, cacti, or even coffee grounds. Can oyster mushrooms grow on top of old Brooklyn Fare bags? Science says: probably.

The tenacity of Pleurotus mycelium has led to some unusual sites for its cultivation. Oyster mushrooms, like many fungi, are remarkably powerful at decomposition — broadly considered, decomposition is the primary engine behind fungal networks. In the case of oyster shrooms, their drive to decompose and their ability to withstand extreme environments has made them choice candidates for the rehabilitation of environmental disasters. Oyster mushrooms are able to break down the highly unstable compounds in toxic substances, such as dioxins or DDT, into stable, harmless constituents. Bioremediation using mushrooms (mycoremediation) is still something of an anomaly, but there are several experiments in recent years that have yielded positive results, where small-scale cultivation of oyster mushrooms has been used to assist in cleaning up oil spills or post-industrial pollution. In oil spills, for example, highly absorbent mushroom buoys soak up the oil slick, and go to work decomposing its hydrocarbons. As we face yet another manmade disaster in the form of the recent oil spill in Mauritius, can we look to the world of mycology to provide some degree of relief?

Webs of rhizome-like mycelium act as a kind of proto-internet for biological ecosystems, and can grow to an astonishing size: the largest known organism on our planet is one such network of mushrooms, a honey mushroom (sadly not edible, despite the appetizing name) in eastern Oregon that covers around 3.5 square miles!

Naturally you won’t find seawater-and-petroleum filled oyster mushrooms in the grocery aisle. But by supporting the efforts of sustainably cultivated mushroom growers, and by thinking of food as part of a constellation of medicinal and ecological purposes, we can begin to understand our mealtime as part of a more holistic framework. In the millennia before industrialization (and supermarkets), a holistic awareness was part and parcel of food production and consumption. Since the standardization of farming practices, mushrooms have been unfairly cast as a subversive side-note to the agricultural revolution. Part of this reputation has to do with their sometimes elusive nature. Truffles are a famous example of fungal hyper-seasonality and can fetch thousands of dollars for a single specimen. In this sense, mushrooms foraging is more similar to big game hunting than it is to growing a crop. In an interview conducted by the Cherokee Phoenix last year, Cherokee Nation chef Tim Kingfisher says, “One time I was hunting and it was during deer season. I seen a deer and at the same time I seen a wishi [Cherokee for hen-of-the-woods AKA maitake]. I said ‘I’ll get the deer later. I’ll get this wishi right now.’” If you’ve ever smelled the umami-rich aroma of a sautéed maitake, you’ll understand why Kingfisher prioritized his mushroom bounty; across continents, and for thousands of years, maitake has remained a sumptuous delicacy.

Preparations of maitake are as diverse as the global settings in which they can be found. Kingfisher tells the Cherokee Phoenix that his family dredges wishi in flour before pan-frying them. In Japan (the birthplace of the term “maitake,” which translates to “dancing mushroom”) maitake are typically cooked with simple, elegant methods that highlight its natural umami-laden richness, such as sautéing in oil deglazing with sake, or simmering the maitake in a stock of dashi, mirin, and soy sauce. Italian chefs know maitake as “signorina” mushrooms, while some Italian-Americans might call them “sinyadeens.” Maitake is very similar to another edible polypore called “chicken-of-the-woods” (you’ll remember that maitake is sometimes referred to as “hen-of-the-woods”) which Italians might know as fungo de carrubo. While not entirely interchangeable, using one or both of these mushrooms will certainly elevate your ragu to the next-level — or consider frying these mushrooms with herbs and serving atop risotto or sausage.

Just from these brief examples, it’s clear that the world of edible mushrooms offers up a diversity of benefits, spanning the worlds of medicine and gastronomy, that have been overlooked in the West for far too long. So far we have barely scratched the surface of fall’s fungi cornucopia. What is the reason for this incredible diversity of the world of mushrooms? We can begin to understand this question if we understand the way fungi works within an ecosystem. A majority of the rich topsoil in forests, for example, is made of mycelial material. These webs of rhizome-like mycelium act as a kind of proto-internet for biological ecosystems, and can grow to an astonishing size: the largest known organism on our planet is one such network of mushrooms, a honey mushroom (sadly not edible, despite the appetizing name) in eastern Oregon that covers around 3.5 square miles! Just this single fungal colony alone is estimated to be 2400 years old and weighs around 600 tons. Everything that happens above- or below-ground in those 3.5 square miles is in some way connected to the life of this organism.

It’s this deep relationship with the life of soil and of forests that gives mushrooms their characteristically diverse range of expressions. Everything that happens on the surface effects the life that teems below, and vice versa. When an accident or disaster occurs, mushrooms often grow symbiotically with the first plants that are re-introduced. One extreme example can be found in August of 1945, “When Hiroshima was destroyed by an atomic bomb, it is said, the first living thing to emerge from the blasted landscape was a matsutake mushroom.” This quote, taken from Anna Tsing’s excellent book The Mushroom at the End of the World, speaks to the unique relationship mushrooms have with cycles of destruction and regeneration, “Indeed, human disturbance allowed matsutake to emerge in Japan. This is because its most common host is red pine (Pinus densiflora), which germinates in the sunlight and mineral soils left by human deforestation. When forests in Japan are allowed to grow back, without human disturbance, broadleaf trees shade out pines, preventing their further germination.” Tsing makes it clear that the deliciousness of matsutake is in no way an apology for the calamitous effects of deforestation. Rather, the matsutake should serve as a symbol of the intrinsic beauties that lie dormant within the earth. Talking about “environmental collapse” as if it is something that concerns external “nature,” and not humans, is a myth we can no longer afford. In the paleontological record, mushrooms existed long before mammals, and it’s very likely that they will exist for a long time afterwards — so let’s try to keep our species in harmony with the planet long enough to enjoy their unique tastiness. 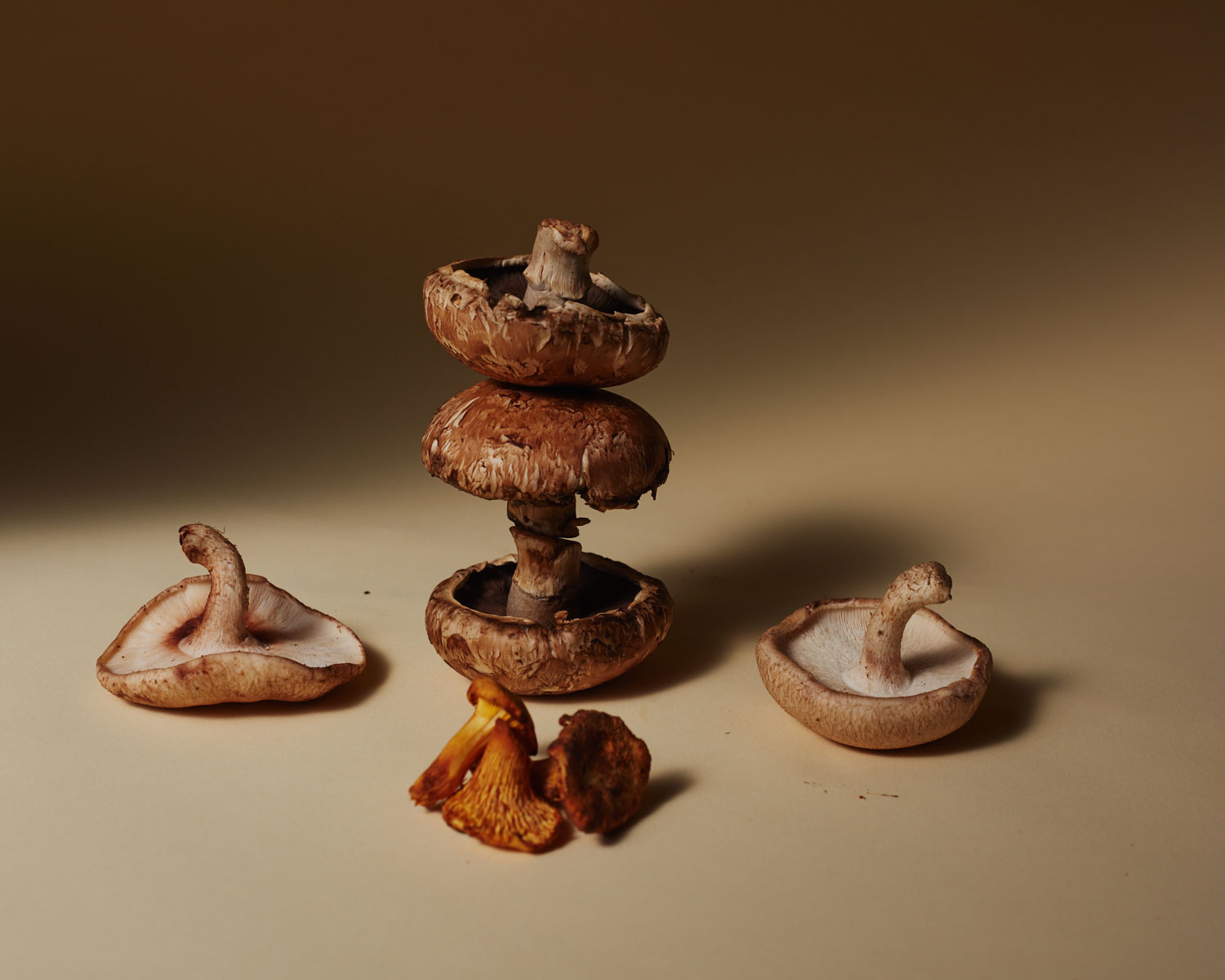 We’ve looked at a few particular mushrooms but it’s important to note a few benefits that can be found across edible mushrooms generally. Across the board, mushrooms provide us with one of the best sources of Vitamin D to be found in the entire grocery store. Mushrooms absorb UV radiation (from the sun or artificial lighting sources) and convert it into vitamin D in a process similar to our skin’s photo-absorption. While vitamin D3 can also be found in egg yolks and oily fish (though in very little other produce), mushrooms are an almost unique source of naturally occurring vitamin D2. It’s hard to underestimate the importance of vitamin D in preventing cancers, diabetes, and depression, especially in a time like ours, where long periods indoors keep us away from the life-giving rays of the sun. Historical prejudices held that mushrooms were a poor source of nutrients, and research into vitamin D is just one way that this misconception has been proven wrong. Mushrooms are also remarkably high in protein and antioxidants, while being low in cholesterol. The antioxidant findings have suggested extremely interesting and diverse results. Studies that link lion’s mane mushrooms to the reversal of neurodegeneration; research into the effect of beta-glucans from turkey tail or cordyceps on inhibition of tumor growth; polypore extracts that boost immunity in honeybee hives; these are just a few examples of the coalescences of recent, peer-reviewed mushroom research. So whether you’ve sat down to a meal of roasted porcinis, stir-fried shiitakes, or Hokkaido uni toast with shaved black truffles (if you happen to find yourself at our sister restaurant), you can know that your immune system supports your decision.

Summer recedes into the rearview mirror on another year, and an autumn like none we’ve ever known stands before us. Fortunately, we don’t have to face threats like coronavirus alone. We have friends, family, communities of culture and of knowledge which can keep us grounded, even at great distances. It’s no longer possible to imagine our immune system as something that develops in isolation; once and for all we must affirm that whatever threatens our neighbors, threatens us — building systems of synergistic mutualism is not a luxury, but a necessity. Mushrooms are our silent ally in the struggle to strengthen planetary immune systems; perhaps this sounds like a tough project until you realize that it can be as easy (and delicious) as making a bowl of mushroom-topped polenta! 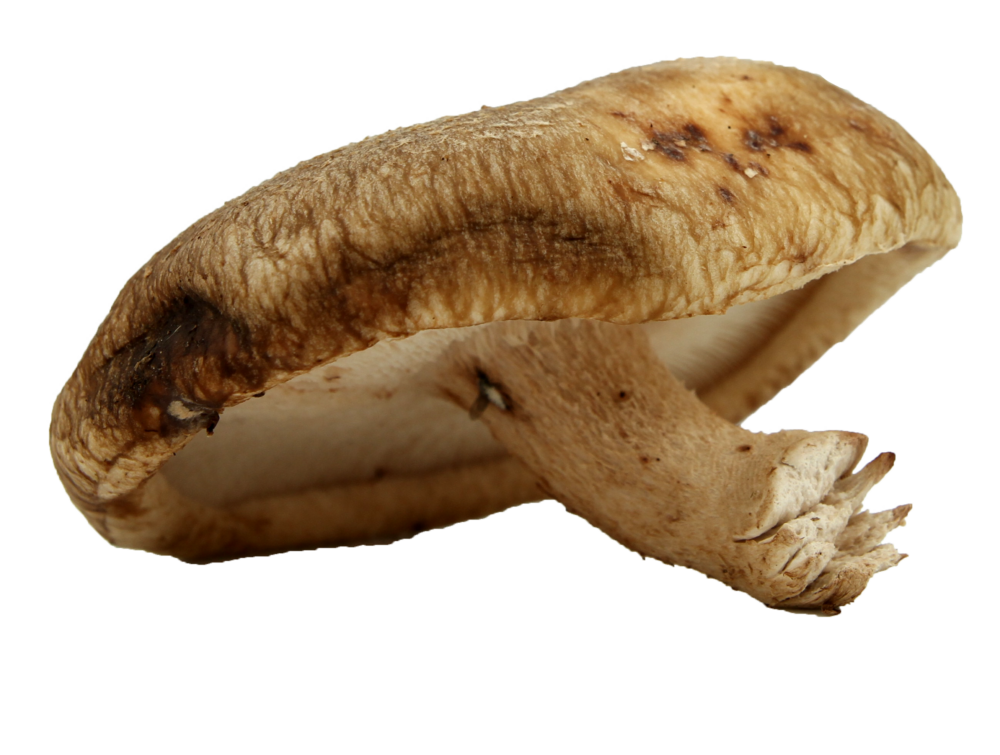 written by J. Daube
for Brooklyn Fare
Back to all issues